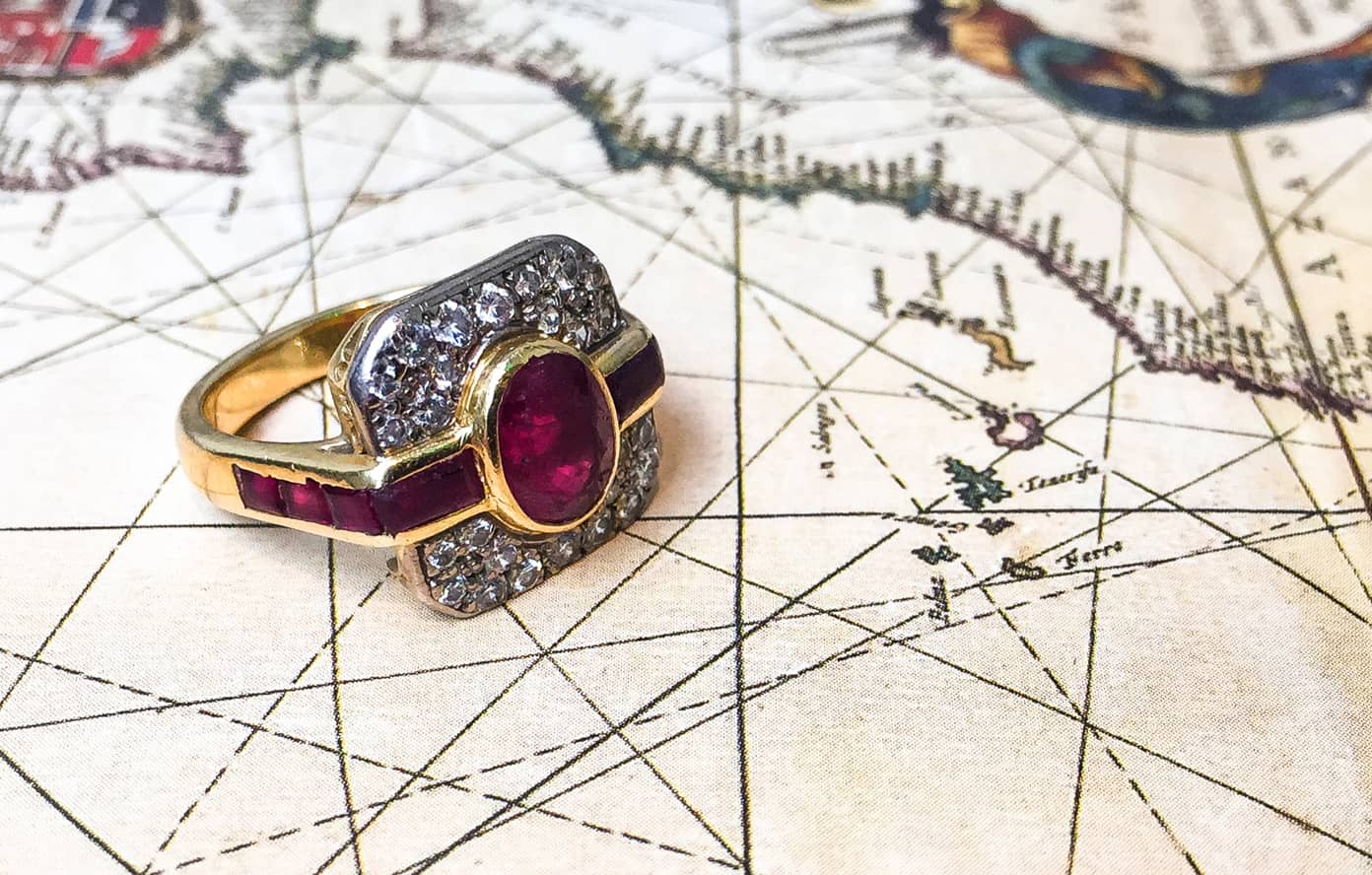 THE VERY FIRST DESIGN
At a time when so many brides-to-be have had to postpone their nuptials, Annoushka reflects on our emotional connections to jewellery and how her engagement ring, which was the very first piece she ever designed, symbolises so much more than that one “big day”.

I first met John in Hong Kong in the late 80’s, he became a friend first but there was always something more between us. As well as the eventual “big question”, John and I fell in love in the City, so the intoxication of young love and the City itself are wrapped into our tapestry. I was and still am intoxicated by Hong Kong and its extraordinary energy; the craft and industry and the feeling that anything is possible. I have wonderful memories of weekends with John discovering amazing people tucked away behind closed doors crafting wood, fabrics and ceramics—each craft steeped in history and tradition, it was really very awe inspiring.

John had to be quite persistent with his proposals, I wasn’t in the right headspace to make a big decision about marriage when he first asked, he prompted a few more times, but I kept putting him off. A few months later, when I think he’d either forgotten or perhaps temporarily given up (!) we were having a late-night long distance call between London and Hong Kong, when I asked if he wanted to ask “that question” again, to which the response was entirely clueless ! In the end I had to rather unromantically spell it out, but as they say, the rest is history. 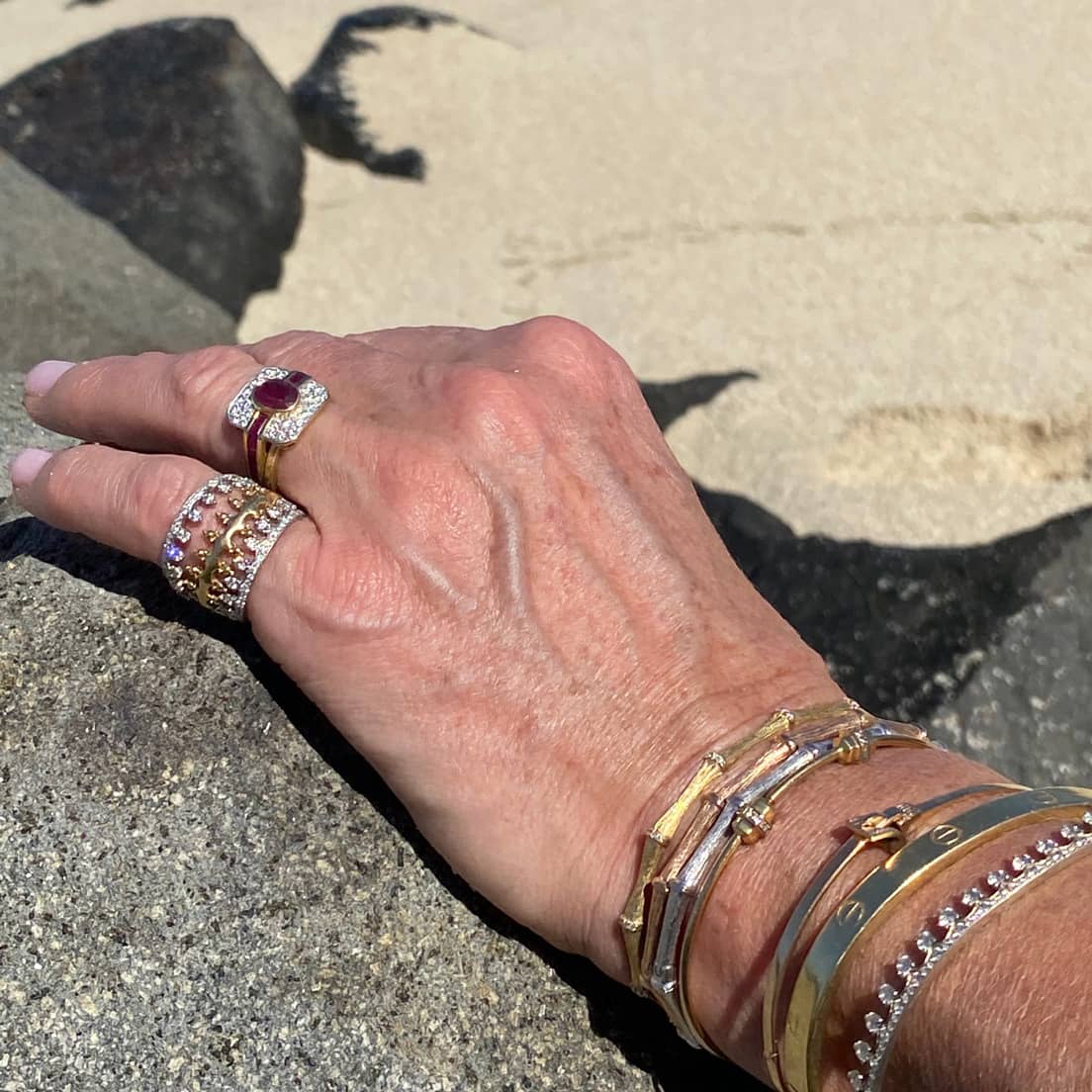 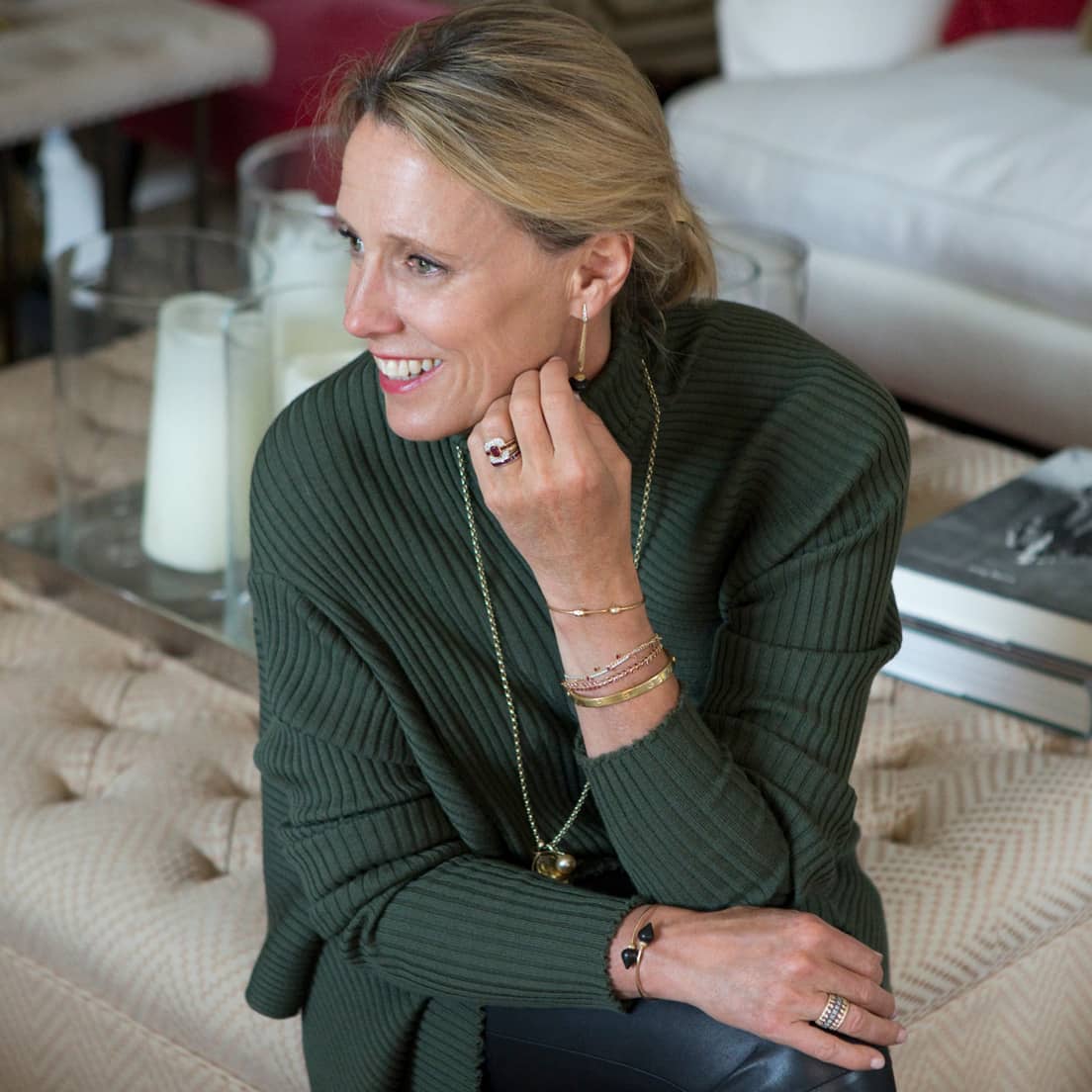 The very first piece of jewellery that I designed for myself is one that I wear daily and like all jewellery, it symbolises a very special story.
My engagement ring was the very first piece of jewellery I ever designed and came about because I just couldn’t find anything that gave me that emotive connection; something which is a huge part of the way I design now. Eventually we found ourselves at a jeweller in The Mandarin Hotel, who showed me lots of different stones. I had originally thought that Emerald was the stone for me, I adore the vivid colour of Columbian Emeralds, but when I actually put them against my skin, they just felt a little flat. In the end, I fell in love with a Ruby, which was for some reason the one stone I thought I didn’t want, but when I put the stones next to my naturally warm skin tone, it became very clear that the richness of the stone really worked. 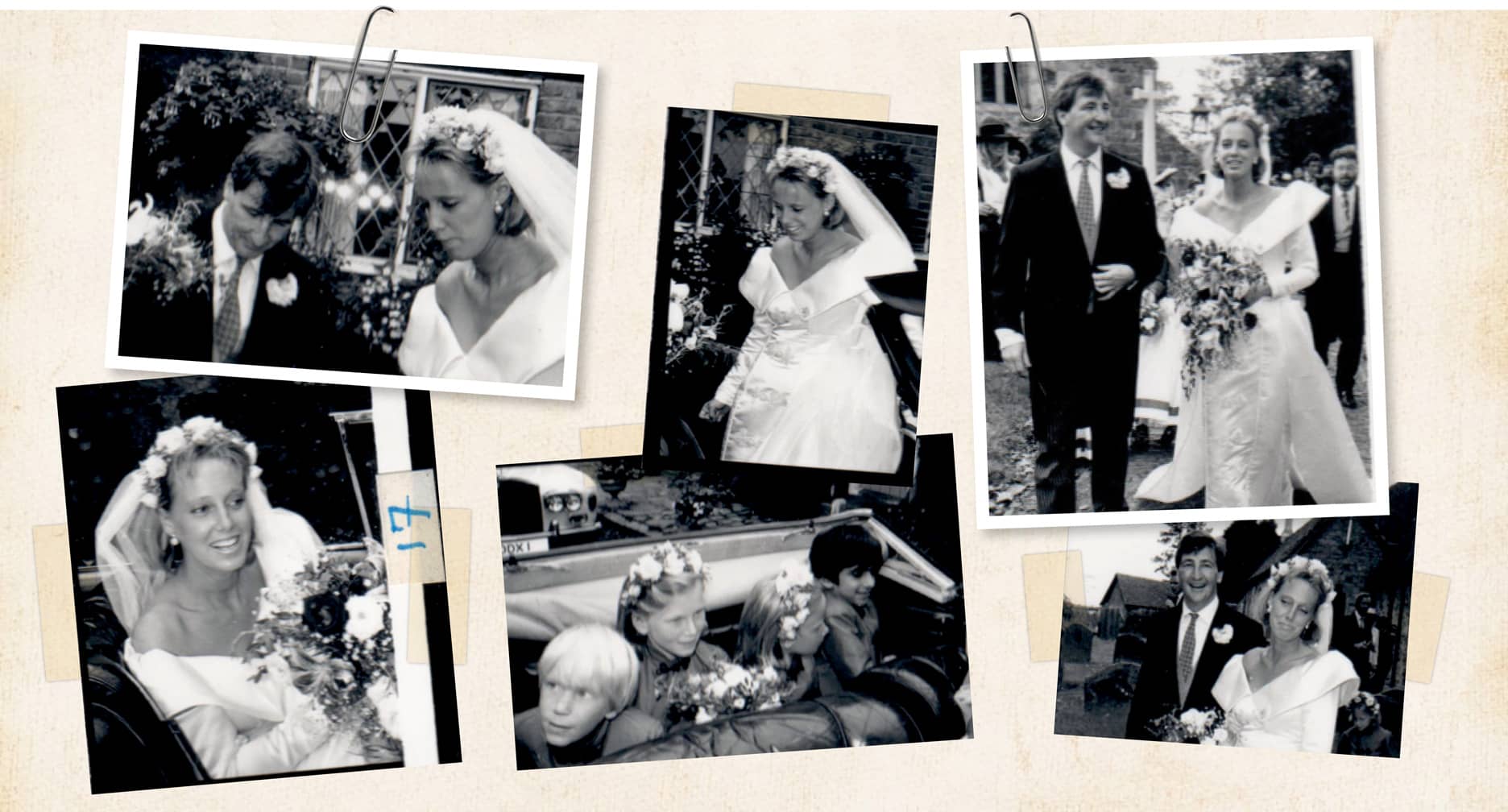 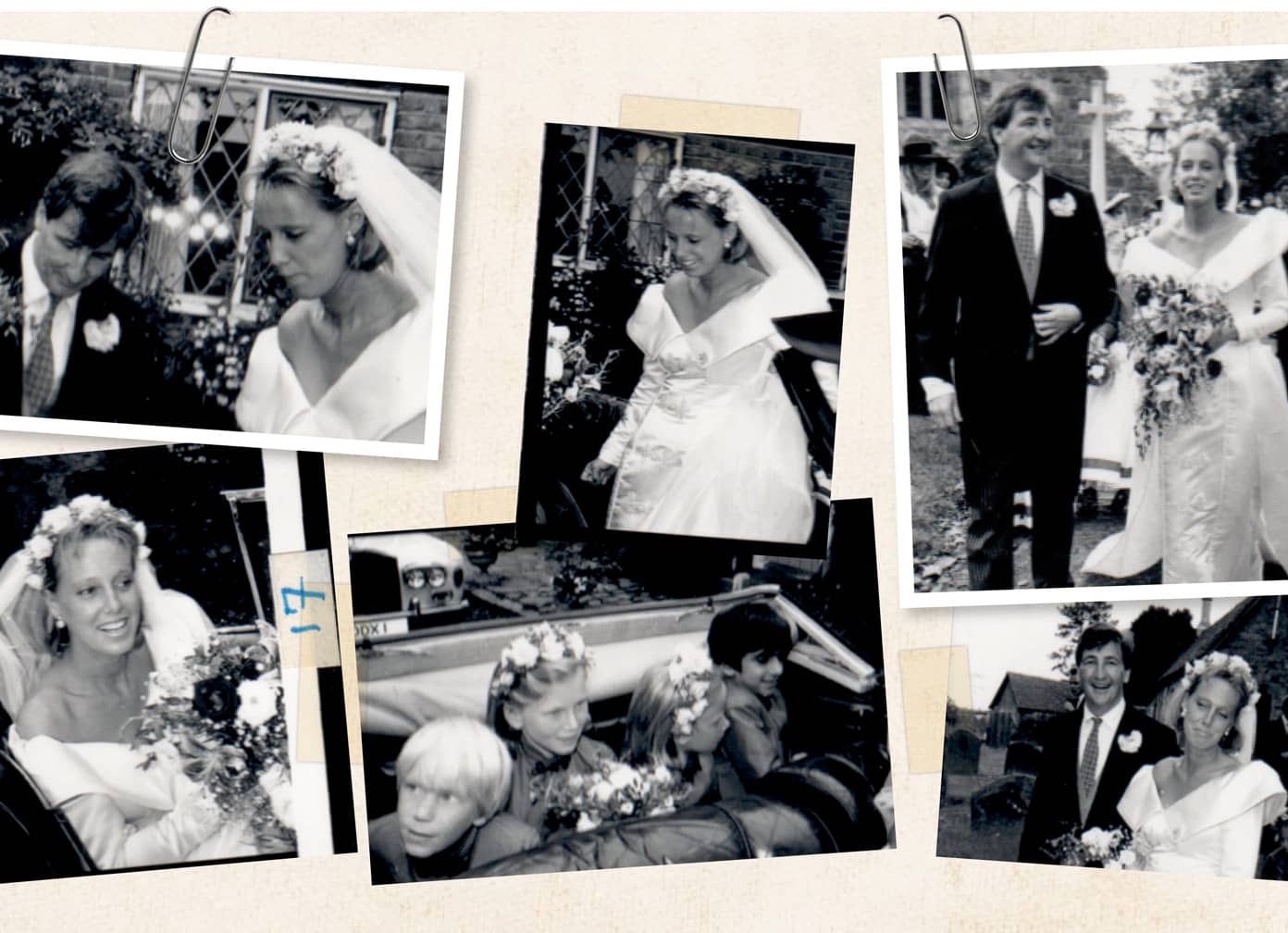 Whenever I am speaking to clients now, I always insist that they try all sorts of different stones on and they are very often surprised by their choices, which I kind of love; the smile when you see someone feel utterly overjoyed and surprised by the power of a stone and its magnificence. Garnet is often a stone that surprises people, but it looks really gorgeous on people with warm auburn tones.

When it comes to jewellery, I’ve always been fascinated with the tiny details and how a piece works on a practical level, when designing something one will wear every day for the rest of your life, you have to be absolutely certain that it feels right and will work. I knew I didn’t want a claw setting for example, because they’d inevitably snag my clothes and when I designed it, we incorporated a gallery, so that I knew my wedding band would sit flush against the engagement ring; foreseeing that kind of detail really helps when I design my collections. My recently launched Marguerite collection is the perfect example of this, bridal or commitment jewellery should be enduring; an every day luxury. The weight and structure were also important so I had the ring made in brass first so that I could feel it move and ensure the dimensions were absolutely right. 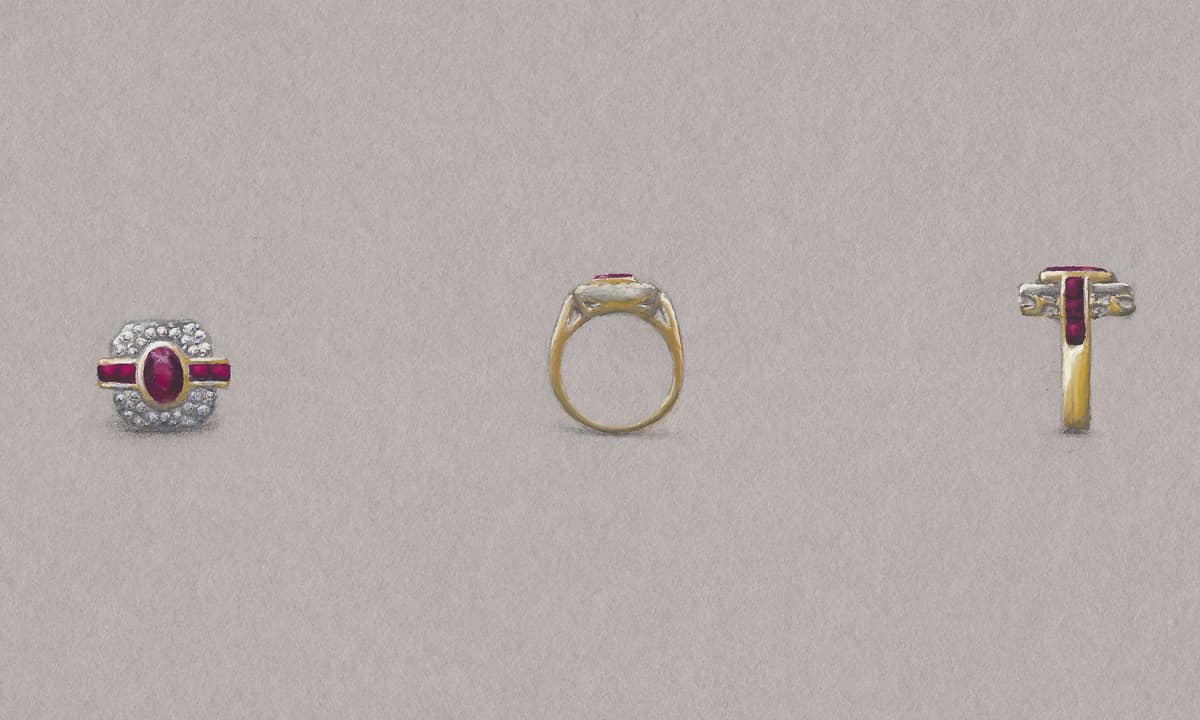 I knew the ring needed to be classical but somehow modern and tactile as well. I’ve always been drawn to the Art Deco movement, I love the symmetry and geometry, Claridges is a beautiful example of this; there’s something in the balance of the pattern too, which felt significant. After a lot of changing I chose to channel set the shoulders with baguette Rubies either side of the central Ruby, which gave it a really striking and typically geometric Art Deco feel.

30 years on, I still absolutely adore it and have truly worn it every day since it was made. Personally it represents everything I love; colour, humour, history, art and our very personal journey from then, until now. As a piece it sums up the kind of design I stand for; enduring, constant and relevant from decade to decade.

The next thing I need work on is a piece to celebrate our 30th anniversary—which luckily is Pearl, which I adore!
Shop Engagement Rings 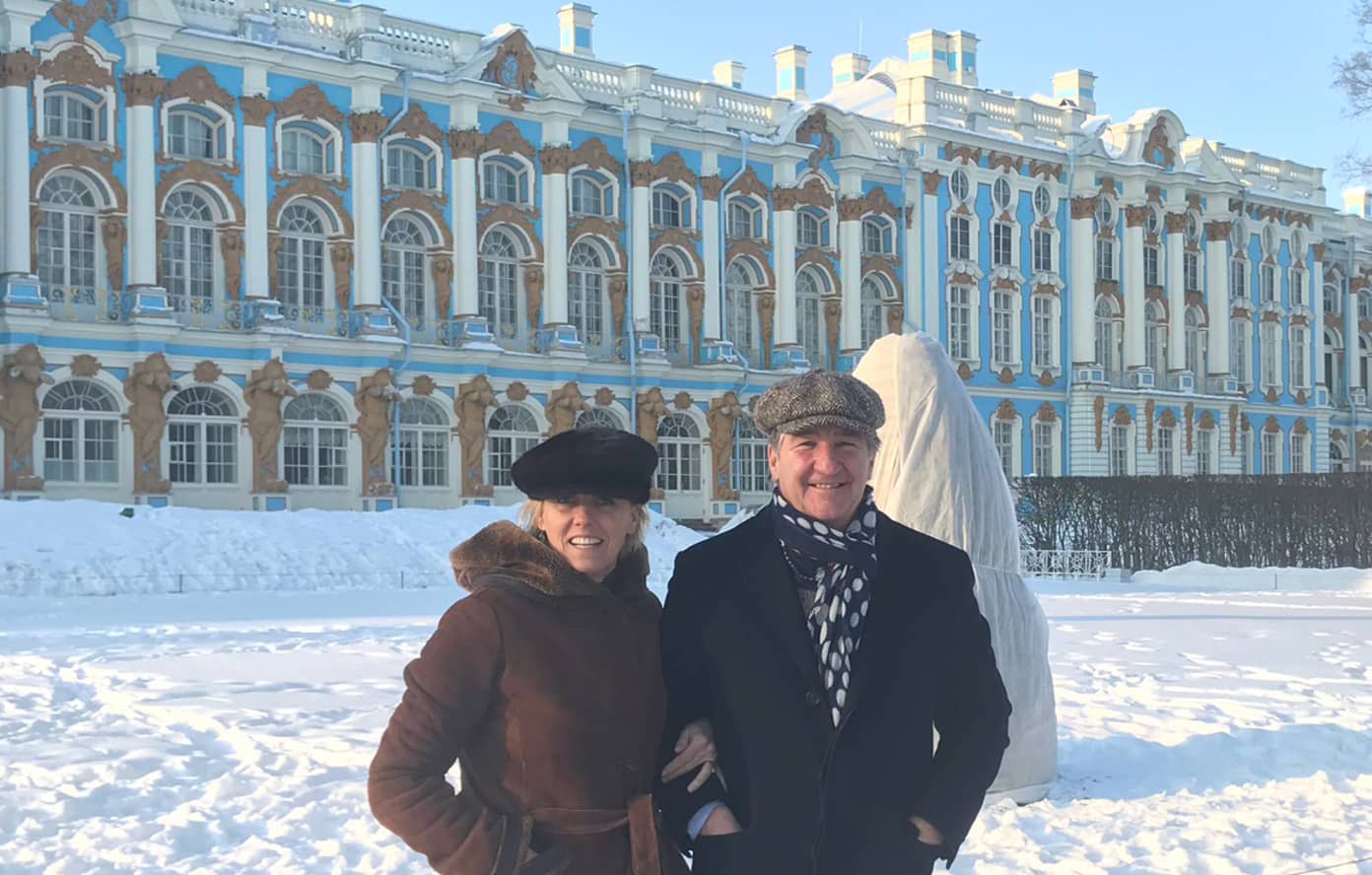 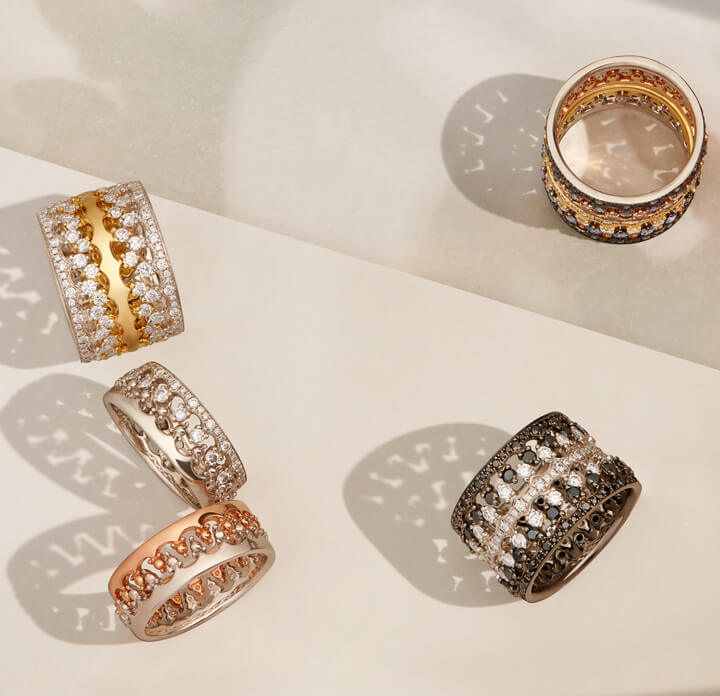 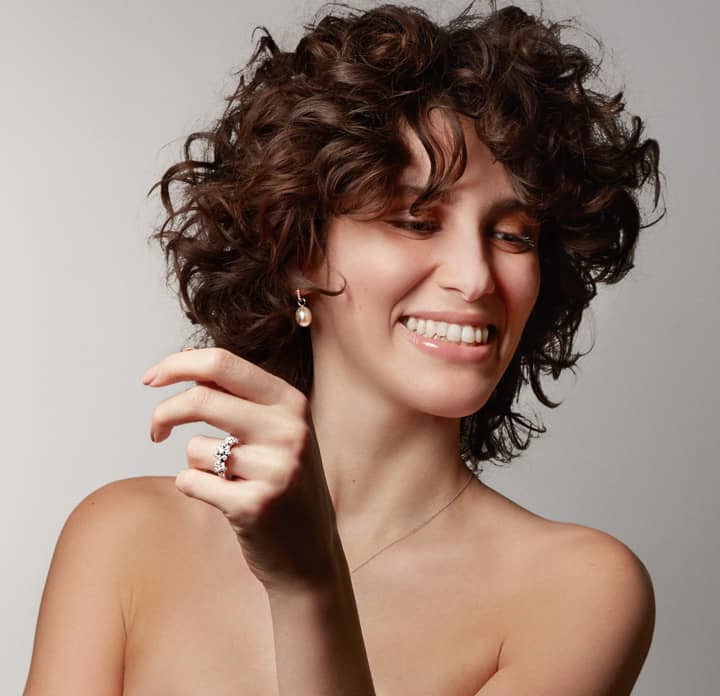 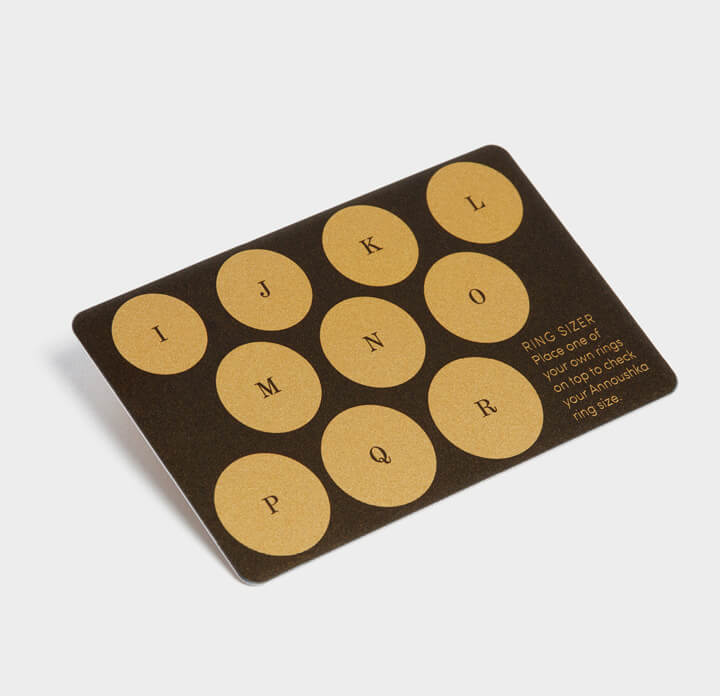 Are you sure you want to remove Annoushka Gift Card from the cart?
WELCOME TO ANNOUSHKA.COM
You are currently shopping on the United Kingdom site.
We are delighted to offer you
Would you like to deliver to another country?
Country
Read more information on your delivery options or contact us.